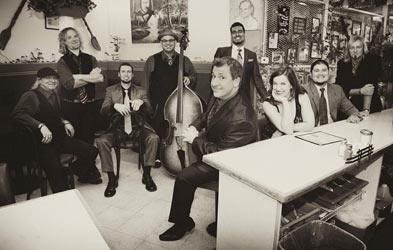 A Sunday Kind Of Love
Return Of The Wildest ...

- 10/26/14: "Prima Jr. seasons his music with elements of early R&B and rock 'n' roll, yet he and his Witnesses, a nine-piece group, quickly establish their own identity." ~Jazziz Magazine

- 07/12/14: "Blow is a fun record with moments of pure excellence that certainly does the Prima name proud." ~Popshifter

- 07/11/14: "Louis Prima Jr. has breathed life once more into the golden age of jazz music, and in so doing has fused the genre with rock and roll in a way that's never been done before. This is a must have album for the summer." ~Republic Of Jazz

- 07/09/14: "Louis Prima Jr. and the Witnesses pick up with the good time shout music that was his dad's stock and trade." ~Cadence Magazine Jul/Aug Issue

- 07/02/14: "Listening to this album is exhilarating; akin to jumping into a '49 Mercury, flooring it, and letting up on the gas pedal only long enough to refuel." ~Stephen K. Peeples, Journalist

- 07/01/14: "Louis Prima Jr. has breathed life once more into the golden age of jazz music, and in so doing has fused the genre with rock and roll in a way that's never been done before. This is a must have album for the summer." ~On Request Magazine

- 06/27/14: "Prima, Jr. is great at singing both the wild up-tempo tunes and ballads. As tight as the music is, the band is loose and makes sure that the fun comes across as much as the musicianship." ~OffBeat Magazine

- 06/24/14: "The mix of vintage R&B with a Crescent City attitude is absolutely infectious." ~Jazz Weekly

- 06/14/14: "Their modern day rockabilly swing has all the great genre blending factors that you come to expect from big band standards. Feels so fresh." ~Bored 4 Music

- 06/08/14: "Blow is a timeless album. It's thoroughly fresh and contemporary while being traditional and familiar." ~Rust Magazine

- 06/06/14: "The overall energy that came from the stage was something I hadn't experienced in years." ~Thumosaic Brainworks' The Mint Los Angeles Show Review

- 06/02/14: "With their second full length, "Blow," Louis Prima Jr. and the Witnesses ring in the summer months with their rock & roll swagger, a bit of soul and classic-era big band noise." ~Innocent Words

- 05/22/14: "The result of blending the skills of these musicians is a blistering assault on your senses that will make you shout out loud and get up and move." ~All About Jazz

- 05/21/14: "Blow has a toehold in enough timeless styles that it holds up as a modern listen, not an exercise in nostalgia." ~Music Scribe

- 05/13/14: "The heart and soul of this music is laid out in no uncertain terms right from the opening track" ~Jazz Global Beat

- 05/05/14: "A scintillating musical experience that will make you shout out loud." ~Jazz News

- 05/04/14: "Prima Jr. & The Witnesses' Blow is one release with enough sonic goodies to stir any listening into dancing feet (4 Stars)." ~Celebrity Cafe

- 04/28/14: "Jr. delivers full-frontal, aggressively wailing performances of music that defies the listener not to tap toes, snap fingers and join in the merry-making." ~Jazz Mostly

- 04/17/14: "A chip off the old block, Prima sings, blows trumpet, and leads a band much like his namesake father did-gets the old sound basically right, but this isn't a ghost band or oldies act. B+" ~TomHull.com

- 04/05/14: "Utterly cool, fun stuff by an apple that sees the wisdom in not falling too far from the tree. Well done." ~CDhotlist.com

- 04/01/14: "Prima and the Witnesses revive a boogie woogie spirit for the modern generation." ~Traffic Beat

Louis Prima Jr. and the Witnesses are bringing Prima music into the 21st century. Not content to sit on the legacy they so passionately protect, LPJ and the band are taking a page from his father's playbook, by wailing Prima Swing for the new millenium.

Building off of the success of their critically acclaimed debut CD, Return of the Wildest!, the band has injected many years of diverse musical tastes into their latest offering, BLOW -- a collection of original music (save for a couple of surprises) as eclectic and unique as each member of this powerhouse band. BLOW has been co-produced by Warrior Records' president, Jim Ervin, and Louis Prima Jr. From the first thunderous stomps of the title track, it is evident that this ain't your daddy's swing music, but a raucous roller coaster ride of tail-shakin', foot-stampin', horn-driven smiles.

If you've seen them in concert, you know a bit about what to expect from the musical minds of the Witnesses. As energetic and over-the-top as the band's live shows, BLOW continues the ever-changing musical journey that Prima Sr. began in the '30s. "With the band's collective talents and diverse musical tastes, we wind up with a sound unique to this band, while staying true to the boisterous Prima style," says Louis. "We didn't set out to simply write music we thought the fans wanted to hear. We wanted to challenge ourselves musically and also challenge the listener. You can't fool the fans by trying to force the word 'daddy-o' into every song. If music does not come honestly from your soul, it will ultimately be short lived."

It's been 50 years since legendary Prima music shook the walls of Capitol Studios. Recorded there in Studio B, where Prima Sr. recorded his hits of the '50s and '60s, and released on Warrior Records via Universal Music Distribution, the seriousness of this new Prima Jr. music is masked only by the obvious fun that was had while making it.

A new legend is being born and it will BLOW you away!